Welcome to Tampa Bay, where the weather is always pleasant and the food always delicious. It’s impossible to visit Tampa and not have the most popular street food it has to offer; devil crabs. Also known as devilled crabs, these are crispy, made with local blue crabs, packed with flavor and not your average crab cake!

This croquette is meant to be eaten with one hand and has a crispy outer coating made of Cuban breadcrumbs. It’s an incredibly fulfilling snack or lunch food and is also the ideal food to serve when entertaining. The seasonings for each devil crab can differ and can impact the overall taste of the recipe.

Let’s delve into the history of the delicious devil crab to learn more about the flavors that influence it.

A little known fact about this snack is its connection to the cigar factories in Tampa in the earlier 19th and 20th century. Ybor City was booming with almost 150 cigar factories and there were workers from surrounding places making their way to them from places like Italy, Spain, the Caribbean and Cuba. Soon these people would settle and form larger communities and the vast diasporas of different cultures began influencing the way of life in Tampa.

It’s very difficult to pin the exact origins of the Devil crab. It could be anything from the Spanish croquette or conch fritters of the Key West. But it’s less about where it started and more about the journey it took to become the final product we eat today. 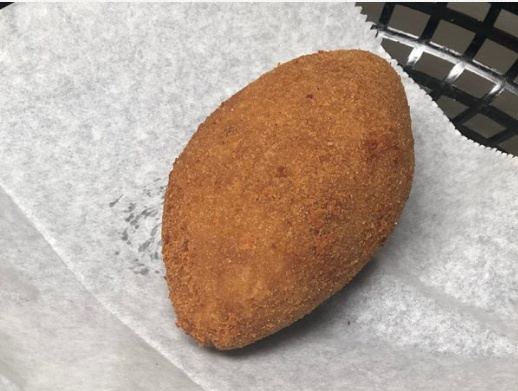 With foods that are introduced by migrant communities, it’s almost always a transformative and reiterative process. They are Americanized and tweaked according to the economic times.  Most migrant workers are unable to get jobs that can help them sustain their lives as well as support their families. Most have to work more than 16 hours a day at minimum wage to be able to make ends meet.

With this food in particular, it became most popular when the cigar factory workers went on a ten-month long strike. To earn money instead, catching blue devil crabs which were found in abundance in the Bay Area then and making croquettes out of them for sale became increasingly popular.

Soon this street food was thriving because of its juicy, local and wholesome flavor. Even after the strike was over, workers continued to sell this popular street food and lo and behold, a tradition was born.

What are Devil Crabs?

The devil indicates the level of spice in the crab meat stuffing. Other ingredients used to make it include green peppers, onion, tomato sauce, garlic, and chili pepper flakes. Each person who makes them brings their own personal preferences into the mix and helps make the dish stand out.

This mixture is rolled into a ball and smothered in breadcrumbs made with stale Cuban bread. The final step is to deep fry it in hot oil and take them out when they are perfectly golden brown.

Looking for the best devil crabs in Tampa Bay? Head over to Pappy’s Devil Crabs for traditional style devil crabs and the modern twist. We offer catering services as well as products for wholesale.